Water Polo is a part of Worthing Swimming Club, in West Sussex.

The senior mens team compete in the Sussex League and knockout competition, as well as the South East Regional Trophy and the British Water Polo League (BWPL), currently in Championship 2.

We also have junior and ladies teams competing in London League and at the National Age Group championships national level.

The club itself was formed in 1890 and the first polo match was played two years later against Brighton SC. The original club pool was at Heene Road and at this time was uncovered and unheated, average temperature was 60 degrees F. After just five years after the club playing there first game they were crowned county champions, as the picture shows the equipment has changed somewhat from from the early days. One major point that should be made the trophy that the team won in 1897 is still being presented to the side that wins the county league in the present day. 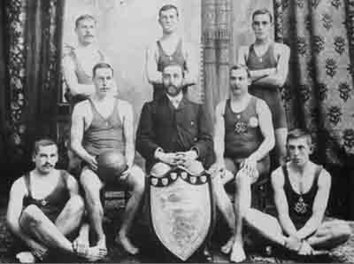 The club enjoyed a golden period in the early 1900’s highlighted by making the finals of the SCASA championships on three occasion (all against Polytechnic) and the ASA championship final against Manchester Osbourne SC, unfortuately on all occasion ended in defeat. In this Worthing team was captain Ernie Paine who was a full England senior international and skippered the national team in 1903. The Worthing team was the leading Sussex side up to the first world war, but the club found it difficult to recapture the previous success in the post war period. It took until the mid 1930’s for the polo team to rediscover some of it’s previous success winning the County second division title in 1935, 1937 and 1939. At this time the club also ran a successful ladies team. The second world war saw the polo team almost disappear for almost ten years because the Heene Road pool was closed but in the early 1950’s the team resumed with some success in the county second division. The polo team benefited from the move to the new Aquarena pool in 1967 and a junior section was started in the early 1970’s, and at this time a lot of the players that are still involved today started playing including Alistair & Duncan Roberts, Graham & Michael White and quite a few others.